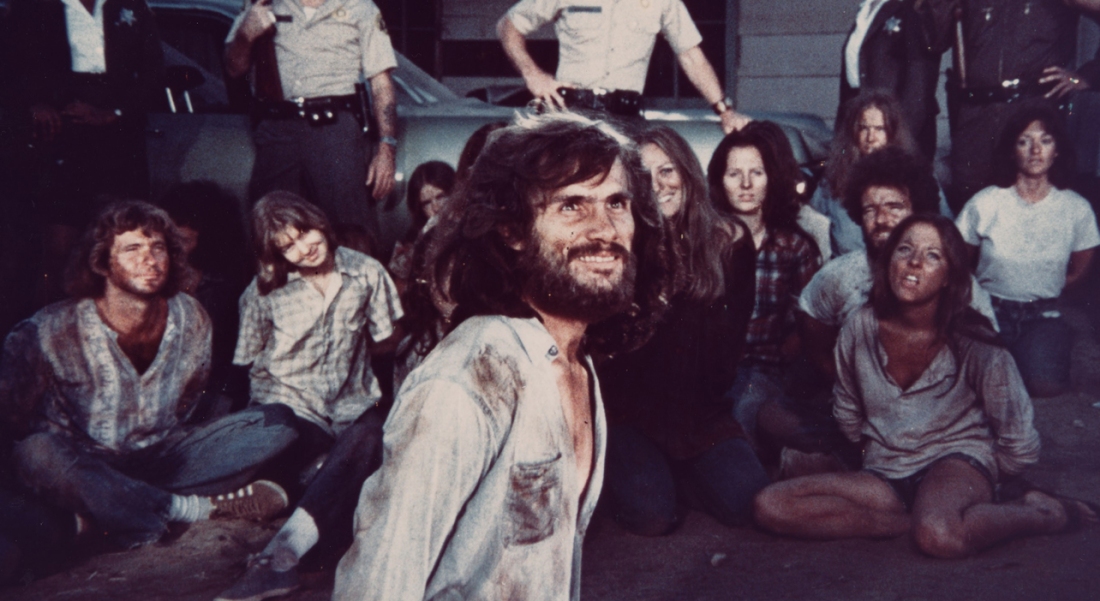 One of the best true crime movies ever made, the original, made-for TV version of Helter Skelter was first aired in 1976. There have been dozens of dramatic versions of the murders and Vincent Bugliosi’s book since then. This version remains the most popular – and frightening – film based on the best-selling book.

The sense of foreboding is firmly in place from the opening narration. “One of the killers would later say, the murders took place on “a night so quiet you could almost hear the sound of ice rattling in cocktail shakers in the homes way down the canyon,” The narration is followed by a woman waking up in her bed, barking dogs, and a couple drinking cocktails in their backyard. The wife thinks she hears gunshots, but the husband sloughs it off and says “Let’s go to bed.”

The L.A. cops bumble almost from the beginning, as one cop presses the button that opens the Tate house gate without gloves. (And then there’s the kid who finds Charlie’s gun in the backyard, which the LAPD tags and forgets about for months, and the TV crew that finds the killers’ bloody clothes.)

George DiCenzo plays prosecutor Vincent Bugolsi in a no-nonsense way, as he plows through the case, despite death threats from the Family. In real life, he was more of a firebrand, but the performance is a fulcrum to the craziness of the other participants. Bugolsi is onto Manson’s modus operandi from the start.

Steve Railsback was so spot-on in his portrayal of Manson, he was typecast and never graduated from playing heavies in  B and C films for the rest of his career. He was up for the part of the villain in Lethal Weapon, but Gary Busey got it instead. When you see Railsback, it’s often impossible to tell that you’re not looking at or listening to the real Manson. He even got the wild eyes down perfectly.

Nancy Wolfe played Susan Atkins, aka Sadie, as a smug, laconic killer, and her performance is chilling even during repeated viewings. She nailed Atkins’ look and baby voice. The grisly details of the murders are made more chilling by Wolfe’s/ Atkins’ matter-of-fact delivery.

A theater actor, Wolfe has had roles in a few short films and on the stage over the past few decades.

Marilyn Burns, better known for the Texas Chain Saw Massacre, has one powerhouse scene on the witness stand. As Linda Kasabian, she stands up to Charlie, and its her testimony that helped convict him and the others.

All the girls are constantly mad at Buglosi and the “pigs”, snarling at prosecutors and the prison guards.

The interviews Bugliosi conducted for the case are accurately recreated. When Buglosi interviews Paul Watkins, Manson’s former lieutenant, the exchange reveals Charlie’s entire “race war” plan. As you watch Watkins (Jason Ronard) talk, you wonder how such an intelligent guy ended up with the Manson family.

“You seem like an independent sort of guy, not just a follower, yet you stayed with the family for a long time. Was it the girls, or was there some other reason?” Bugliosi asks.

“Because Charlie was Christ”, Watkins replies to a shocked Bugliosi.

Interesting side note- Watkins’ daughter is a Guggenheim fellow and author of an award-winning book of short stories.

There’s a scene where Charlie and the girls are on a bus to jail for Grand Theft Auto – before anyone knows the Family was involved in the Tate murders.  Charlie leads the family in a sing-along, which sounds much more ominous than 99 Bottles of Beer on the wall. Right here, near the beginning of the film, we see how he has total control of his followers.

Even the brief scenes of the girls in front of the courthouse are creepy. The girls made a vest for Charlie containing locks of their hair, embroidering it outside the courthouse, and we see Charlie wearing this vest in a few of the courtroom scenes.

Manson’s attorney, Irving Kanarek  (renamed Everett Scoville for the film) was a controversial lawyer who used constant objections and delays, even in his pre-Manson cases. In one case, Kanarek objected to a witness stating his name because the witness had first heard it from his mother, according to Bugliosi in the book Helter Skelter. Kanarek/Scoville was played by American character actor Howard Caine.

Since the movie was made in the mid-70s, the actors still have that authentic hippie/counterculture look. The clothes and hairstyles in the modern fictionalized Manson movies look cleaner and more “hipster” looking as the years pass. If you were around in the late ‘60s/early ‘70s, you can tell the difference.  Even the biker characters look every bit as dirty as their real-life counterparts.

Today’s films and books about Manson and The Family often have an agenda. They want to prove that the race wars theory was fake, or that the still-incarcerated Watson, Krenwinkel and Van Houten are political prisoners, etc. Strict retellings only capture the public’s attention for so long.

While some people looked at Manson as a criminal mastermind, the devil, or Jesus Christ, Bugliosi knew the truth. “His troubadour act is part of a con to get us to underestimate him,” Bugliosi says during one of his first in-court glimpses of Charlie. During the last scene, when Charlie talks to Bugliosi for the last time before being taken back to prison, he says “I almost did it. I almost pulled it off” (referring to the race war).

“No, Charlie, you took a bunch of sad kids and played jailhouse games on them.”

Many films and TV shows people found frightening as kids seem tame or boring when you see them as an adult. Helter Skelter has some of the over the top background music prevalent in 1970s horror movies and occasional jarring editing, meant to make the film more menacing. These effects may seem silly to some viewers, and add to the intensity for others.

The courtroom scenes still scare me even after four decades – when Charlie leaps at the judge, for example, and Sadie/Leslie/Patty’s orchestrated outbursts.

This made for TV movie was broadcast in two parts on CBS in 1976, on April 1 and 2.  Some affiliates showed the movie late at night, while a few refused to show it. Many sponsors refused to advertise during the movie. It’s hard to believe the movie caused such a ruckus; while disturbing, it was hardly explicit or gory. The verbal descriptions of the murder scene (and a few brief shots of bloody bodies) were enough to scare off advertisers and some viewers.

The second made-for TV version of Helter Skelter, starring Jeremy Davis as Manson,  released in 2004, features more details about Manson and life in the Family. Ultimately, it wasn’t as well-received as the 1976 version, and garnered an average three-star rating  on IMDB.

Helter Skelter is available on DVD and Amazon Prime.